It's Better at Buddy's! We're Open!

Here are 6 American food items that are known and loved by almost everyone. Have you tried all of them before? If not, drop by any of our 4 Buddy’s Bar & Grill locations. Read on and discover 6 of the most symbolic American food dishes served at all of Buddy’s Bar & Grill locations, that just taste like the ol’ U. S. of A.

The most popular American food is, without a doubt, the hamburger, or just burger. Hamburgers have come a long way, and there are endless variations. No two hamburgers are alike! Buddy’s offer a wide range for you to choose from. 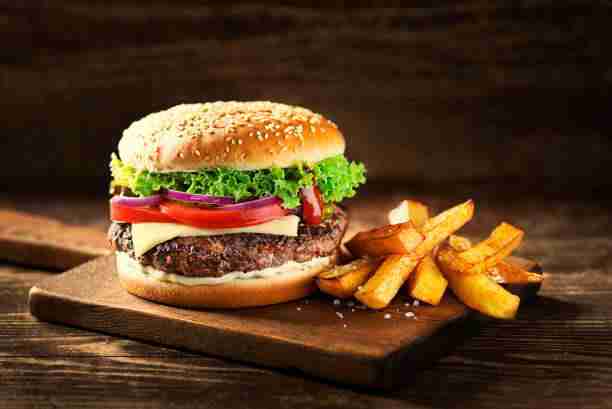 But there may be some things you don’t know about hamburgers:

Let’s face it; there isn’t anything in the world quite so tasty as your first bite of a rich, juicy hamburger. Hot dogs came to America with German immigrants, most probably in the late 1800s. The tasty fast food soon became a common street food and a classic snack at, for example, baseball games. They can be great for a quick lunch, a grab-and-go snack, or an easy meal for any occasion. Typically they contain a Vienna wiener or Frankfurter in a long bun, generally topped with mustard, ketchup, relish, sauerkraut, onions, or cheese.

Americans eat an estimated 150 million franks every year on Independence Day. The most famous American hot dog eating contest is televised live from Coney Island in Brooklyn, New York, and features contestants eating as many hot dogs (and buns) as they can in 10 minutes. Fourteen-time winner Joey Chestnut holds the current record after consuming 76 hot dogs in 10 minutes in 2021!

Everyone likes their hot dogs differently. Check out Buddy’s wonderful hot dog choices, all  served with french fries and coleslaw. Or, come on in and build your own specialty hot dog.

Pizza is a dish of Italian origin, probably invented in Naples. It usually consists of a round, flat base of leavened wheat-based dough, topped with tomatoes, cheese; and often various other ingredients, including pepperoni, pineapple, ham, meatballs, mushrooms, and bell peppers. It is then baked at a high temperature, traditionally in a wood-fired oven.

If you have that undeniable urge for an American food style pizza, just step in to your nearest Buddy’s Bar & Grill where a selection of delicious hand-made pizzas awaits you. 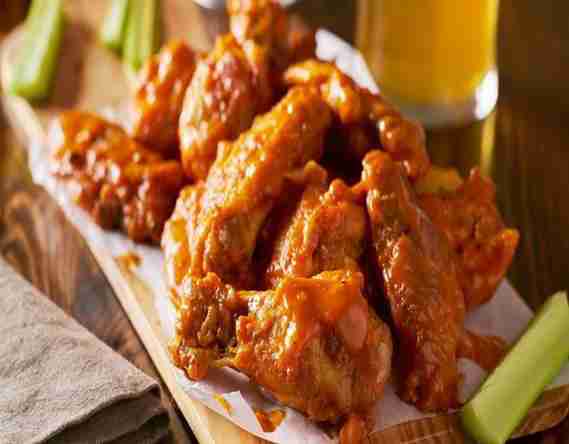 Chicken wings are deep-fried white meat, juicier and with a more concentrated poultry flavor, like dark meat. They are usually served tossed in a vinegar-based sauce that can be anything from mildly sweet to insanely hot.

The world-record for most chicken wings was achieved by a man by the name of Patrick Bertoletti who ate 444 wings in just 26 minutes at an event known as the 2016 Wing Bowl.

Now, whilst Buddy’s chicken wings are definitely more-ish, you may not be able to beat that record. But, you are more than welcome to give it a try. Just come casually dressed, preferably with an apron, and loads of serviettes – this finger food is messy!

Chili con carne, meaning “chili with meat”, is a spicy stew containing chili peppers, meat, tomatoes and often pinto beans or kidney beans. Other seasonings may include garlic, onions, and cumin. The dish originated in northern Mexico or southern Texas.

Chili can be part of a healthy diet and lifestyle. Of course the choice of toppings added can affect this! Apple pie became an American staple as far back as the 17th century. Sliced apples, sugar, and brown spices are a common filling, topped with a golden and flaky pie crust.

Buddy’s Bar & Grill serve their apple pie (or apple crumble, if you prefer) with vanilla ice cream, fresh out of the oven or cold. It is probably their most popular dessert, a real American food all-star dish, as American as – well, apple pie.

Our friendly staff look forward to welcoming you to Buddy’s Bar & Grill for proper American food, just like Mom used to make. End of the Month BBQ Party at Buddy’s Soi 22

End of the Month BBQ Party at Buddy’s Soi 22